I’ve never never been to this place before

This is so different from the one I call home

The place is a mystery, as I am washed to shore

This place seems different yet familiar, as I try to roam

I seem to remember flying, then falling

I look around as footsteps grow closer

And a voice from afar, seem to be calling

I feel a bit scared as the sound draws ever nearer

From the bushes, out came little boys

They were holding spears and toys

Some looked mean, others just lazy

He came swooping down, a smile on his face

They gathered ’round me,

I feel so out-of-place

He told them I’m a friend, a story-teller, you see

We went to the hollow tree; which was better known as Hangman’s tree

This is where they lived it seemed

It was a lovely place to be

It was a sight to see, though the light there seemed a little dimmed

He then took me to where the mermaids played

They were indeed beautiful creatures

Jewelries and pearls on the rocks they laid

One of them raised her hand for me to reach her

I stretched to try and touch her

Someone pushed me from behind

Before I knew it, I fell on the water

They pulled a prank on me, which was really unkind

I’ve had enough fun for one day

Mermaids are no fun than pixies

But the day proved to be more fun, not gray

For we foiled Hook and saved an Indian princess

But Hook had something up his sleeve

He devised a wicked plan

If he couldn’t make Peter leave

He’ll blow him to kingdom come

Captured we were and I was about to walk the plank

Head held high, I refuse to be mocked

I look at the sky, pray the Lord a thanks

As I drop no splash, everyone was shocked

Alive he was to Hook’s surprise

He begged Peter to save him, he’ll pay for his crime

It was fun, a lovely time, so happy to have played

I’ll always remember him, his stories I will share 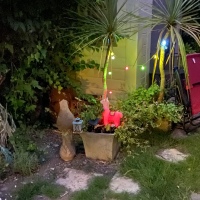 every story has an impact, each tale matters

Read, if you dare